Pardon the dust, but I spent six weeks in Spain the beginning of this summer walking the Camino de Santiago de Compostela.  Just as an FYI, Santiago means Saint James, so this pilgrimage is literally called The Way of Saint James.  You can look it up for more history if you want.
I walked with my friend Sarah who spoke excellent Spanish since she had been living there for two years.  It took us 33 days to go nearly 500 miles and it was a mentally and physically challenging, yet an extremely wonderful experience.

Here are some of the reuse diy crafts I came upon along The Way.
First, during the summer of 2012, Sarah spent the summer at home and she made a backpack rain cover with fused plastic bags.  Here's the result.  I think it's super cool: 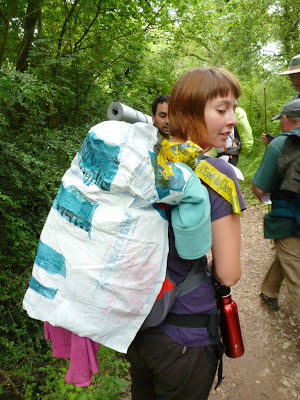 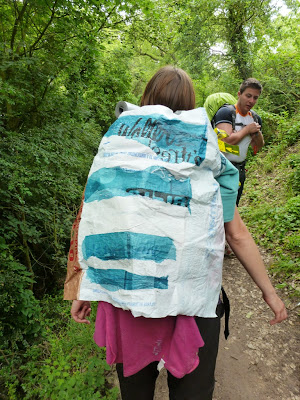 In Pamplona, which is a pretty neat city, we came upon this decorated bicycle:

Along The Way we came upon these flags that stated how much garbage a person creates in a day, super cool:

One of the hospitalarios showed us all of his artwork, which was pretty amazing, but I also noticed he was wearing this sweet fanny pack.  It turned out he made it in '89, wow, original hipster! 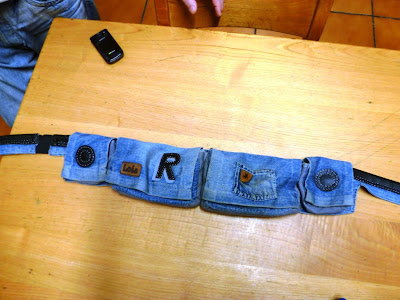 We also saw some very cool and interesting iron work done on somebody's fence for their house: 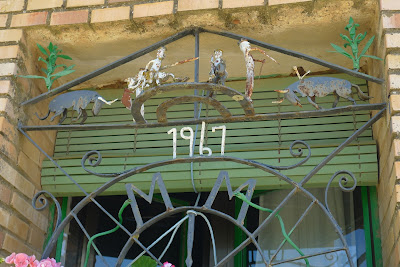 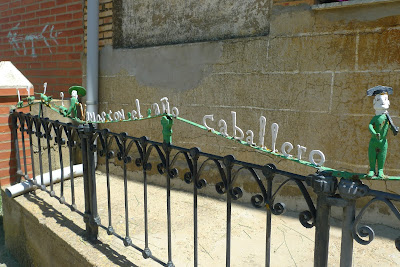 We stayed at an albergue that had a lot of artwork done by the hospitalarios and they had a very interesting way to decorate their hanging pots: 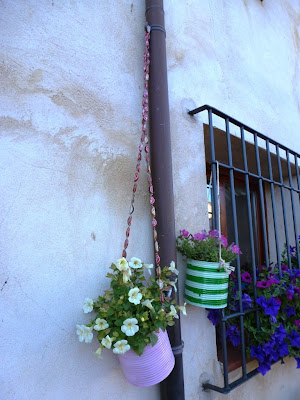 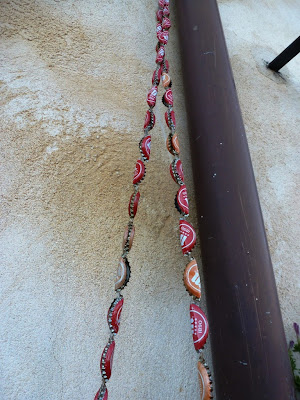 They also used a some really cool large old cans for planters, which I really liked, but did not take a photo of.

There were many crosses along The Way, but this one was exceptionally cool and somebody had made a peregrino (pilgrim) sculpture, which was kind of funny. 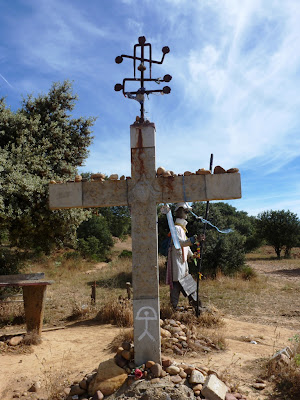 We were on a hill leaving a pueblo when we spotted a map of the world in the distance.  I have no idea what it was made out of, maybe rocks? maybe bushes?


I would like to mention that there's a very DIY Spanish method to lancing blisters on your feet by threading thread into them and leaving it there so you can "floss" your blister a few times a day.  That way the blister doesn't refill with fluid while you are walking and it's much more comfortable.  Of course, you want to make sure to sterilize everything with iodine and then use an antibacterial while flossing the blister.  I was blister free until week three when I had to do this.  I took a photo of it, but I will spare you even though I find it fascinating.

So we made it to Santiago.  Here's a photo of us as we arrived at the Santiago Cathedral: 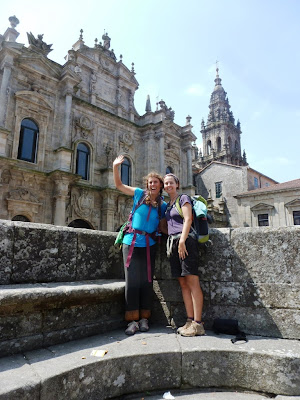 We spent a night in Santiago, went to the Pilgrim's Mass where we saw a 175 pound incensario swing above our heads, super cool.  It was meant to fumigate the flea ridden pilgrims of yore.  We then caught the bus to Finisterre because we didn't have time to walk.  Finisterre means the end of the earth, which it was to the Spanish before Columbus set sail.
I also learned that this pilgrimage was pre-Christian.  The pagans use to make a pilgrimage to the Atlantic, jump in and burn their clothes and they were born again.  That's just what I did.  We spent the day on this gorgeous wild beach and I jumped in the Atlantic.  That night we walked up to the lighthouse, watched the sunset where I burnt my hat and Sarah burnt her boots because they were done for: 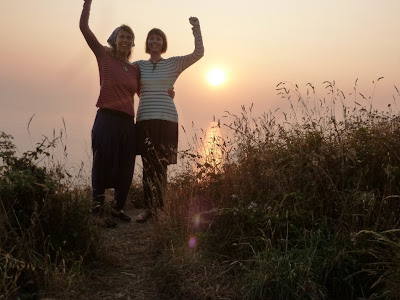 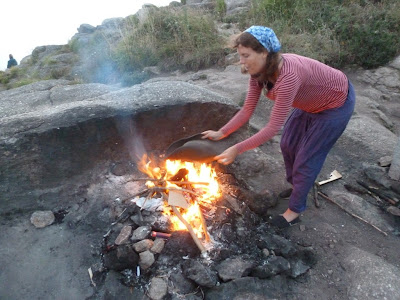 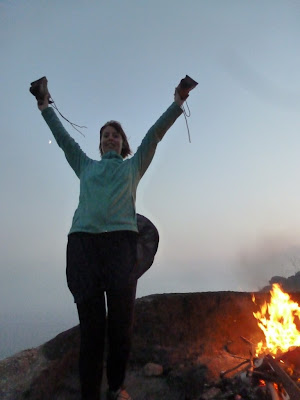 We had a great time.  We saw a lot of amazing things, but you are definitely getting a different, very diy view of the Camino.  I hope you enjoyed it~
Buen Camino

Posted by Bece Mariah Kidder at 11:04 AM