I was leaving yoga today and Lisa Mae, the owner of the studio, told me about this image she had seen on the internet about a farmer who was denied the right to build a barn for some reason for his horses, so he built this super awesome structure instead.  Apparently there were no laws against building a giant table and chairs. 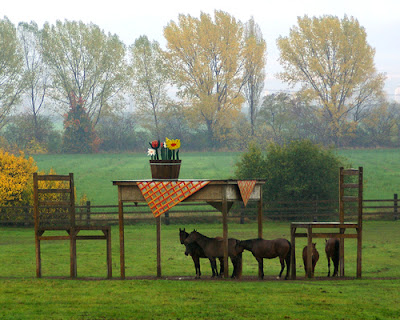 This conversation came up because I was talking about various upcycle crafts, namely the clip-on earring magnets that I recently made, and she happened to think of this.

I was laughing so hard when I heard the story, party because it just sounded awesome and partly because it instantly reminded me of a dream I had last night where the neighbor had made and installed these three giant (as tall as the trees) black bulls with accents of red glitter on that little strip between the sidewalk and street.  In my dream I had thought they were really cool.  What a strange world :)  I love it.

I did a little research on this installation and I would like to mention that the table and chairs not only provided shade for the horses, but was used to advertise the farmer's business.  Here are a couple of quotes I found.

Three horses try to hide from the rain under an oversized table and chair in a pasture near Doellstaedt, eastern Germany. The huge garden furniture was installed by a local wood merchant to promote his products.


Horses stand in the shadows of a gigantic table and two chairs during heavy summer heat in Doellstaedt near Erfurt, eastern Germany, on Friday, 2004. Wood dealer Jens Braun built the unusual furniture as a protection for his horses.

Anyway, I hope this inspires you to seize the spring and do something creative!!!

Email ThisBlogThis!Share to TwitterShare to FacebookShare to Pinterest
Labels: horses, Table and Chairs