Hello, crafters.
On Saturday evening, myself and some friends hosted a bike-in movie/Pedalpalooza ride.  For those of you who have never heard of Pedalpalooza, it's a nonstop 3 week bicycle festival in Portland, Oregon.  By nonstop I mean there are at least 10 rides to choose from every day for 3 weeks.  It's a lot of fun.

The movie we showed was Wild Zero, which is Guitar Wolf's action packed zombie/alien killing spectacular.  If you have never heard of either Guitar Wolf or Wild Zero, just Google it.
In the movie, Wild Zero, there are a lot of flames ejecting from tail pipes of motorcycles and cars and microphones; yes, the movie is that cool.  For the ride we encouraged people to dress like Guitar Wolf, which meant a lot of leather, shades, just a general Rock N' Roll look.

To get into the spirit of things I decided to add some tail pipes and flames to my already very decorated bicycle.  I think it looks pretty tough.  The flames are made out of Mylar and the tail pipes are some items that I picked up at SCRAP.  I have no idea what they are. 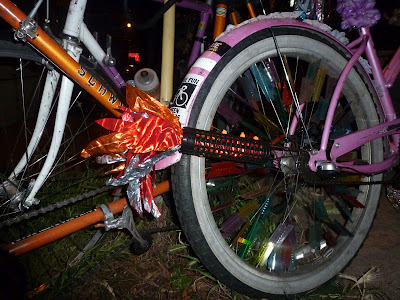