Okay.  So I have a ton of old Mylar balloons in my attic because I was going to make a dress out of Mylar, but now I am not so sure.  Since I have invested in so much Mylar I just throw it into projects here and there, like the Mylar garland.
This summer I came up with an icon garbage collection.  So far I have only made one, which I have entitled Tilt, but I have been collecting all sorts of cool car smashed aluminum cans ever since I came up with the idea.

I was first struck with the idea after seeing this smashed Tilt beer can up against the curb just glimmering in the sun like a beacon calling to me.  It struck me that this would be perfect amongst a background of Mylar.  I then found some scrap wood out on someone's curb for free and it was on. 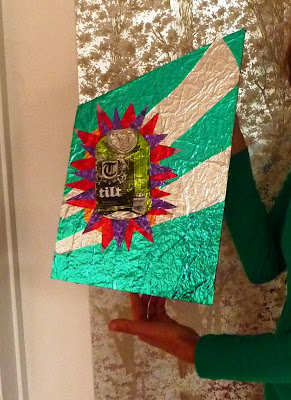 I kept this piece really simple, just focusing on the can.  I think I shall get more intricate in the future, but this was a good starting place for me.
Right now I am too focused on making holiday gifts to work more on this project, but I plan on making more in the new year.
Posted by Bece Mariah Kidder at 7:28 PM